The 2010 PSP Chicago event was not the greatest event. Rain, mud, humidity, and bad locations. The first day I was at the event, it was decent. Decent meaning minimal slop at vendors row and the sun was out. The booths that I can remember that were there were Derder, Guerrilla Air, Custom Products, Exalt, KM, Understood, AlienPB, Ninja Paintball, Bob Long, HK/PBFashion, Empire, Dye, TradeMyGun, Vicious, Virtue, Planet Eclipse, Draxxus, and social paintball.

The rain caused all sorts of problems. One being the delays. On Saturday, we were supposed to start at 1pm so we got into the pits at noon. The refs on the field told us to expect to start playing at 1 but we didn’t get to start until 3:15pm. On Sunday, we were delayed by an hour or so in the middle of our match. And needless to say, the water and mud that built up on the field affected our game play. Another problem with the mud was that it made it difficult to move in some places. I dove into the 50 dorito and got mud all over my gun and it stopped shooting, a teammate of mine dove into the juicebox but his arm got stuck in the mud but his body didn’t which led to him dislocating his shoulder. Gearbags aren’t meant to roll through the mud. And I lost count of how many people I saw just slip and fall on and off the field. And from what I was told, some techs at some places were being pissy. Probably from having to sit around in the crappy weather.

I don’t know why this Chicago event was not held in Boilingbrook like it was for the past few years but I definitely liked it better there. There was parking, better hotels, and very open to the public.

The shuttle system PSP had going was a truck pulling a seating trailer that could hold approximately 25 people. There were 2 trucks shuttling people back and forth. The shuttles filled up so quickly that people started to walk the 1/2 – 3/4 mile back to their cars.

The hotel locations sucked. Our hotel was in a shady part of town. You know it’s shady when you can walk into a gas station that doesn’t sell beer or liquor at 1:30am and ask for some beer and liquor and the cashiers response is hold on and then starts negotiating prices for a small bottle of jack and a case of bud light. And usually, the hotel rooms are pretty spacious; enough to house 6 guys with gearbags and luggage. Granted this time there was 8 of us but we had 2 rooms and there was no room to walk around or find some floorspace to sleep on. The drains were clogged in our showers so dirt was just building up, the locks didn’t, work, and they kept running out of towels. I feel like I paid too much for the conditions we were staying in. We stayed at the Comfort Suites. There also weren’t that many actual restaurants around the hotel. We had to drive at least 20minutes to find some sit down places. At one point we were in Indiana but that’s only because that’s where the closest Golden Corral was and it’s a team tradition for us to go to Golden Corral after a tournament.

This event was held at a paintball park, Badlandz. Most paintball parks are isolated and far from the public; much like Badlandz. I thought a goal of PSP was to promote paintball to the public. How can that be done if we’re out in the middle of no where and are not in view of the public? Yeah, it was kind of cool to see woodsball, speedball, and recball all happening at one time in one place but I don’t think it’s worth being secluded from the public.

Overall, this event was not enjoyable as other events. The best part for me was that my team made it to Sunday. I know it’s not Badlandz or PSPs fault for shitty weather but it still sucked. Hopefully it’s not like this next year.

Didn’t get to watch all the center field games from PSP Chicago, well now you can with PSP On Demand. Right now, only the games from Sunday are up for viewing but more are still waiting to be uploaded.

here are some pics i took in chicago. there aren’t that many but it’s better than nothing. 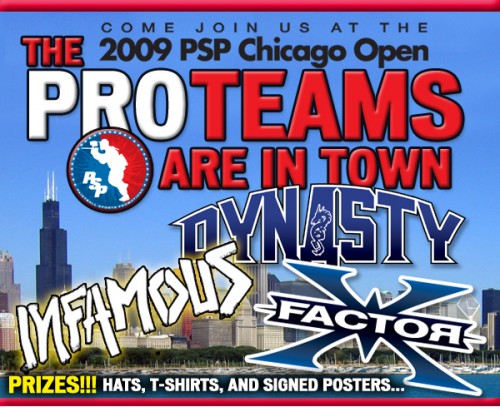