Sup-Air the official bunker sponsor of the National Professional Paintball League has created a new NPPL bunker kit for the 2011 tournament season. Together the NPPL and Sup Air have decided to eliminate the center U. The League will also eliminate two small cakes and one small dorito from the 2010 field. The new upgrade kit will replace these obstacles with two large cubes and two giant wings. The Official 2011 NPPL Field will still have 44 bunkers, eliminating 3 small bunkers plus the U and replace with 2 Giant wings and 2 large cubes. The 2011 field will offer many different options for the NPPL Field Design Committee to create dynamic play fields. The goal is to provide larger bunkers on the field making it harder to get eliminations off the break and promote longer games. 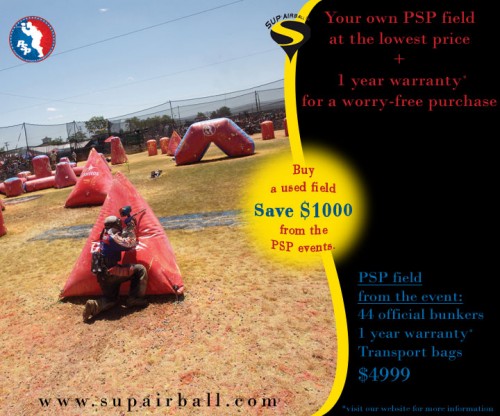 Buy your very own used PSP field from supair for $4999. You get a 1yr warranty with purchase.