Indianapolis Mutiny Signing at the Sly Booth
Saturday at 11:00 AM

Nicky Cuba Hosting Live Webcast
Don’t miss a minute of the action from this weekend’s US Paintball League Surf City Open. Every game on Center Court Friday, Saturday and Sunday will be brought to you live hosted by Professional Paintball’s very own Nicky Cuba. For only $3.00 per day (or $7.00 for all three days) you can watch the Center Court action live from the beach and enjoy Nicky’s commentary and interviews with your favorite pro players.

Welcome to the VIP
For $45 per day, you can enjoy covered seating atop the Center Court grandstands, overlooking all the weekend’s hottest games with the ocean in the background as you enjoy an adult beverage with your favorite pro players. Hosted by the Pro Players, the VIP Deck will include the commentary booth for the webcast and live Center Court show – so don’t be surprised if you get asked to sit in and say a few words to your friends at home through the webcast. Tickets may be purchased at the Registration tent on-site. Grandstand passes are available also at the Registration tent for $10 per day or $15 for the weekend.

Player Party with Pros Guest Bartending
The first player party of the weekend will be Friday night at Beachfront bar and grill with drink specials from 8:00 pm – 11:00 pm. Beachfront is located at Main and Olive just across the street from Starbucks. Every half-hour from 8:00 – 11:00, a new set of 2 professional players will take over as bartenders. Having played all their prelim games during the day, they will be ready to unwind and have a good time. If you’re over 21, join us at Beachfront Friday night for drink specials and much more!

Reffing brought to you by the Pros
Could care less about the VIP and Player Parties because you plan on making it to Sunday? Then let’s talk reffing. After hand picking some of the most qualified professional referees out there to ref Center Court, many pro players will also be serving the cause by reffing every game on the Spyder and Eclipse field all weekend long.

Pro/Am Update
With only one day left to pick their pro, Division 7man teams have been sending in many requests for their favorite pro player to walk fields with them for an hour on Thursday and help support them during their second set of prelim games on Saturday. So far the following Pros have been spoken for:

Game Schedules Released
We would like to thank Chris Raehl of the APPA for handling all aspects of team registration and the schedule for this week’s event. Download the schedule for this weekend’s games. If your team is competing in this event, be sure to make any roster changes by end of day today or there will be a $20 fee to make changes at the event (Check-in begins onsite at 1:00 pm Thursday). Get those insurance waivers signed by parents, order your ID Cards on-line, pack your flip flops and grab some sunblock. The HB event is only hours away!

Info thanks to Junior Brown.

This is what i have pulled out for you guys.

News just in! or I should say I have just hacked into Rich Telford’s E-mail (Well it was on the table) and a draft press release was on it! Looks like one will be coming soon from the new 7 man league! I thought to myself, what the hell, you guys support www.sacpaintball.com so I should try and get you guys some hot news before any other site does…The name on the email was USPL
How it looked to me was Western Conference and an Eastern Conference with 6 events across the United States. Having 7-man play from Div 3 to the Professional and 5 man after that. It looked like two HB events one at the start and one at the end with four events in-between two on the west coast and two on the east coast. It looked like you play your conference and the HB to get a full season in for points but if your team has money you could play all. Some thing else on the email was talk of the first HB being 3 days not 4 and the date was April 3rd to 5th not 2nd to 5th like some people have been saying. 5 of the Teams owners formed a board of directors but I didn’t see the names of them on the email. But I did see Chuck Hendsch, Camille Lemanski and Tom Cole named a few times. So who are the pro teams? I did get that first…

It looked like this and more will be out from the league in days! Or even sooner now I have posted this. I did see more on the email but that’s all I can remember.

I have one more bit of info I think might be true. But I will post that later tonight or tomorow, onto this thread when I find out 100%… Keep looking back.

Understood clothing has teamed up with XSV to produce a new line of clothing and other soft goods for fans to buy. Understood will be making XSV shirts, hats, and gatwrap. The products will be available at World Cup 2009. 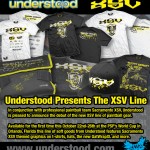 Update: Apparently there was a pump division.