This isn’t an easy email to write. After 5 years with PSP, I have decided to move on and pursue other interests.

I wanted to write and say what a great opportunity it has been working in this industry and with people like you. I’m grateful for all the experiences I’ve had and friends I have made along the way. I have truly enjoyed all my time with PSP.

Thank you for answering emails, attending events, and generally supporting PSP over the past years. Feel free to contact me anytime at (removed private email). I wish you all the best going forward as the New Year approaches.

Happy holidays and thanks for everything!

VIllaDirect has partnered up with PSP for World Cup. VillaDirect offers a variety of places to stay while attending Word Cup; ranging from 2 bedroom condos to 7 bedroom houses which can house 4 – 16 people. All VillaDirect housing comes with laundry facilities, air conditioning, full kitchens, pools, free national and international phone calls, and secure entry locking systems. Some rentals may even include spas and/or game rooms. Stays may be as low as $25/person for 4 nights. Majority of the rentals are within 3 miles of Disney’s Wide World of Sports Complex.

Make your reservations today online with VillaDirect or call Rebecca Perez at VillaDirect at (407) – 397 – 1210. Reservations may also be made through the official paintball reservation toll-free line (866) -626 – 5221.

PSP is bringing back their Premium seating for World Cup 2008. The seating is covered platforms that have been raised 10ft in the air and are located on both sides of the NXL scoreboard. Each box has a maximum capacity of 8 seats that are away from spectator coaching. In addition to the shading seating, premium seat ticket holders get an event t-shirt and on Saturday and Sunday, get complimentary beverages and snacks that will be distributed by the PSP girls. Wifi will also be available with these seats.

Another perk of getting these premium seats is that you can stay up to date with NXL scores even if you aren’t in your seat because you can recieve the scores immediately after the match on your cell phone. (I assume it’ll be via text message.) Not only do you get all that was previously mentioned but you also get a back stage pass to the players pit, where you can mingle with the pros and divisional players.

There’s even more of a bonus with the purchase of these premium seating tickets. One, you get special coupons for some of the major vendors. A great way to pick some of the new items for 2009. Two, you get comlimentary bag check-in service. And if you buy two premium seat tickets, you get reserved up-front parking for the whole week.

Private box seating is also available for those big spenders. Private boxes get four extra seats in their box, making it a total of twelve seats total in your private premium box seating. With a private box, you may hang a company sign on it for some extra advertising. Contact Keely Watson at [email protected] for more information or to reserve your private box today.

Sounds like it’s definitely one-upping the grandstands at NEO 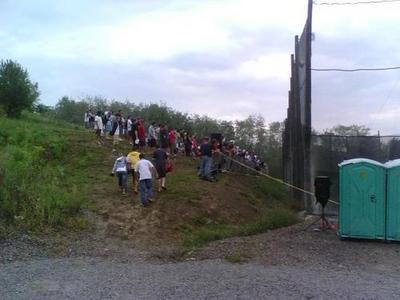 Starting at the 2008 Chicago PSP Open, there will now be a semi-pro class for players. This is a classification not a division. This was basically done because the NXL was reduced down to 12 teams from 16. By doing this, PSP has given no name, teamless pros a chance to play and prevent sand-bagging.