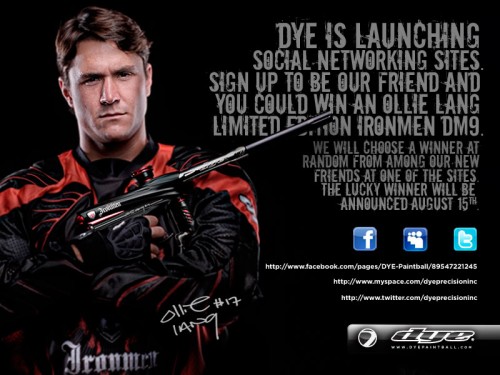 DYE has decided to be all trendy and join the major social networking sites: myspace, facebook, and twitter. If you friend them on any of these sites, you could be the lucky winner that gets an Ollie Lang LE Ironman DM9. The winner will be announced on August 15, 2009.

At the end of the video you can see, who I think is Ollie, wearing an i4.

Yesterday, there was a photo of Ollie using what was believed to be a DM9, and last night, Dye posted a video of the new DM9, though I didn’t notice since I was too busy playing Spore, which is awesome by the way.

The video just consists of fading/focusing shots of the marker followed by the features, which most seem to be patent pending. Thanks for letting me know Dye; I was planning on copying that.

It seems to be a DM8 that’s been milled with a new eye holder thing. The milling, I think, looks kinda like the old Shocktech DM5, but with more and sleeker lines. They also finally removed the on/off that no one ever used.

It’s nothing really game changing or new, but it’s what you would expect from Dye.