The NPPL, or really it’s parent/holding company, Pacific Paintball, which also has PB2X, Paintball.com, XPSL, and a couple of other things, is in the process of declaring Chapter 7 Bankruptcy. No Chapter 11 for them. Some VCs are probably pretty unhappy right now.

Basically, all of Pacific’s assets will be auctioned off, with all the capital being given to the creditors that Pacific couldn’t pay. Some person or group could get some good deals, assuming they can actually do something with them in the end.

There will also be a meeting for all the “big wigs” in Vegas. Mostly, I assume, about this and how to keep their own asses from failing. There is also supposed to be talks about the possibility one single league (for the entire world, no, the universe) with one set of rules

John Amodea, the editor of PB2X, has sent out an email about PB2X and his future intentions. He has a blog that he will keep updated.

Pacific Paintball and its subsidiaries will be filing proceedings under the United States Bankruptcy Code to effect a liquidation of their respective assets and business operations. The affairs and assets of Pacific Paintball LLC, NPPL LLC, XPSL LLC, PB2X LLC, Xtreme Paintball Fields LLC and Camp Pendleton Paintball LLC will be administered by a court appointed trustee in bankruptcy. The bankruptcy court will provide you with written instructions regarding how and where to file any claims in this matter.

Despite doing all we could do, we were unable to make the business a viable concern. Further, in this severe economic climate, we were unable to secure new funding. It is a truly regrettable outcome, though one which is unfortunately occurring more and more frequently in this environment. We thank all those who have supported us.

By now you probably have heard that Pacific Paintball and its subsidiaries will be filing proceedings under the United States Bankruptcy Code to effect a liquidation of their respective assets and business operations. This includes our magazine, the NPPL, and all of Pacific Paintball’s other companies. Since many have speculated as to what this means as far as the magazine and my future in paintball goes, I thought I’d try to clear that up.

First, the liquidation of Pacific Paintball means that all of the company’s assets—from their computers, airball bunkers, netting and other physical property as well as their trademarked names—will all be sold. This is assuming there are interested buyers. At least that’s how I understand this. That leaves open the possibility for someone to buy any of the Pacific Paintball brand names to continue running the operation(s) as they see fit.

As for me—I’ve been in paintball for 23 years, with 18 years of running paintball magazines. This is what I am and this is what I’ll continue to be. I will pass on more about what I will be working on next at my new blog site, http://john-amodea.blogspot.com/, which will be up and running this Friday, December 5th.

Finally, I wanted to express my gratitude for all of the relationships I’ve developed and for all of the support you’ve given to Paintball 2Xtremes Magazine. Please keep in touch and feel free to e-mail me at [omg, no spam]. I look forward to working for and with you all again soon. 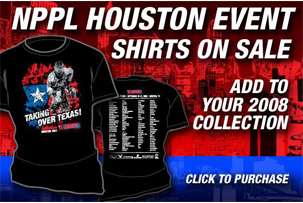 If you didn’t get anything from NPPL Houston, well now is your chance. Then again no one got anything from the event since it didn’t happen. NPPL had shirts made before the event was canceled due to Hurrican Ike. Pacific Paintball probably doesn’t want a whole bunch of shirts leftover from an event that didn’t happen so they decided to sell shirts for $20 each. Sizes range from S-XXL.

We had this story 5 days ago, but now the NPPL is announcing that PB2X magazine has been bought by Pacific Paintball who also happen to own them.

No new information has been released really, and I don’t really feel like typing up a lot for this, so here’s the whole press release.

Pacific Paintball is pleased to announce the acquisition of Paintball 2Xtremes Magazine, the preeminent paintball industry magazine. “Pacific Paintball is dedicated to building the finest media based company in paintball. We are a one stop shop for anyone who wants to market to the paintball world,â€ said Shawn Walker, President of Pacific Paintball. â€œNow with the industryâ€™s top magazine – Paintball 2Xtremes, the greatest Paintball Tournament Series in the world – the NPPL, the highly successful regional league – the XPSL, the popular live tournament web cast – NPPLLive.com, the upcoming paintball television series airing on Fox Sports Net beginning this October, Pacific Paintball is uniquely positioned to provide industry and non-industry advertisers with a variety of media opportunities that reach paintballâ€™s highly sought after audience and to continue its leadership role as a key supporter of the paintball industry.â€

Paintball 2Xtremes Magazine (PB2X) was established in 1996 by John and Mike Henry and later purchased by National Paintball Supply in 2000. John Amodea, who was brought in as the magazine editor in 2000, will continue to serve as editor-in-chief of PB2X. Cheryl Amaya, Publisher of PB2X, said, “We are very excited about joining the Pacific Paintball family and about their desire to continue to grow PB2X. We are also pleased that all of our current management team will be staying with the magazine. This will allow us to continue to provide our readers with the best coverage of all aspects of paintball including; scenario ball, recreational ball, tournament play, professional teams, technical reviews, market news, and local coverage.”

Mr. Walker added, â€œWe plan to invest significant time and resources into PB2X to increase all aspects of the magazineâ€™s offerings, which readers will see over time. The transition will be seamless, with the October issue the first under Pacific Paintballâ€™s management.â€